Last month I took my first trip of the year to Vegas with my best friend and met up with more people while we were there. I actually haven’t traveled with her in several years. We have our occasional outings in the Bay Area, but work schedules often make it difficult to plan an actual vacation or quick getaway, so we were both pretty excited about it. We took an evening flight and got picked up by one of her friends, then had dinner at Shake Shack. The bestie had never been there, so it was a good time to take advantage since it wasn’t busy on a Thursday night. We walked off our meal by heading through Monte Carlo (soon to be named Park MGM) and taking the City Center Tram to Bellagio. We took a look at the Chinese New Year display at their conservatory. I loved the huge Husky with the moving tail! 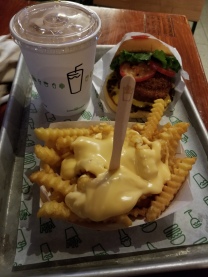 Shack Stack, cheese fries and black and white shake with strawberry (their version of Neopolitan).

Love the displays at Bellagio! 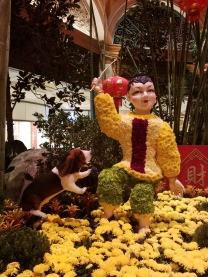 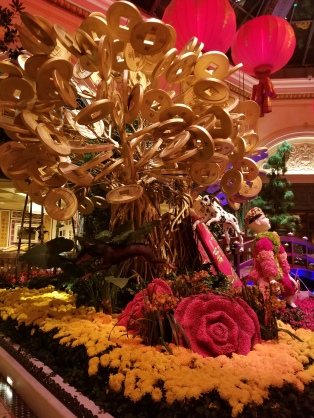 The next morning we had brunch at Truffles N Bacon. I came across them on Instagram and it was a must that we try their Ube French Toast. We lucked out and ordered the last 2. There’s a really good reason why it constantly sells out. Layers of ube bread with ube cream cheese and young coconut in between, topped with condensed milk and a dollop of ube jam make this a pheNOMenal treat for anyone who loves this “purple stuff”. Considering all the ingredients, it wasn’t overwhelmingly sweet. I opted for the chicken and waffles instead and it was amazing. I usually don’t have the best tolerance with spicy stuff, but if you visit and order this, try it with their honey sriracha. You won’t regret it! 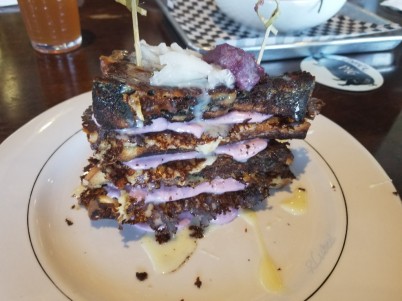 Behold the Ube French toast. This was amazing.

My order of chicken and waffles and shared orders of Pig Pen Fries and Disco Fries.

Our now group of 4 got touristy in the afternoon and rode the Gondola at The Venetian (unnecessary Vegas bucket list activity, check). We also visited their CNY displays. They had another adorably huge dog (a sharpei) located near the waterfall that sits between The Venetian and Palazzo hotels.

Dinner later that evening was at Sushi Neko. Neko is Japanese for “cat”, so there is feline themed decor strewn throughout the restaurant. I found it a bit funny that they were playing K-Pop at a Japanese restaurant, but I was totally feeling it (It even reignited my interested in listening to it. I blame you, BTS). The last time I had all you can eat sushi was ironically in Vegas last year. I didn’t bother keeping track of how many pieces I ate, but I assure you that everything we ordered was good. 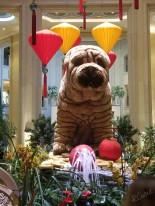 Mama Sharpei. This one was huge.

We also zipped past Wynn. Got to take a quick snap of this dragon.

Interesting layout for a Japanese restaurant.

Definitely busy on a Friday night, but our wait was about 15-20 minutes.

Just a fraction of the goodness we had for dinner.

Our last whole day together was nothing short of fun filled. We checked out the China Lights display at Craig Ranch Regional Park. If it weren’t for the blustery evening, we would have gone through the whole thing. We decided to head back after watching the Chinese cultural performances. 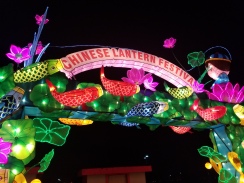 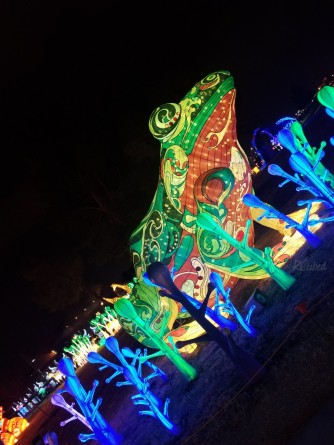 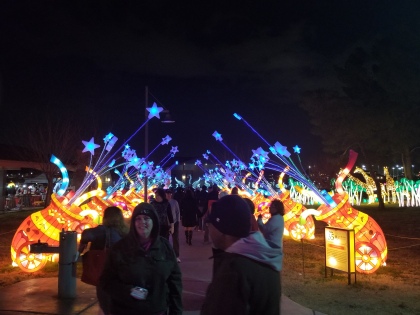 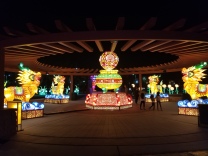 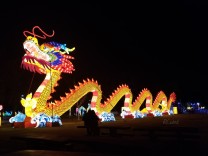 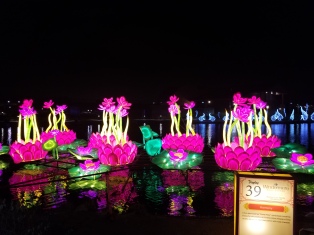 We capped off the night at Omnia with a DJ set by Zedd. I haven’t seen him since Coachella in 2014. It was nice to actually see his face from the second level of the club compared to being several hundred people deep in a muggy and dusty tented area. 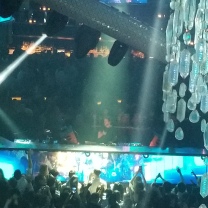 I’ll be back in Vegas within a few months for a bachelorette party, so the experience will be much different compared to this. This was the first time in a while that I’ve visited without having a rental car, so I probably would have gone to more places If I had one. Then again, no matter how many times I’ve been here, I always manage to discover something new. Have any recs for my return trip? Feel free to let me know in the comments.

**I also found out last week that I’ve been on WP for 5 years. The first few were inactive, but I’m glad that I still held onto this account. Otherwise, I probably wouldn’t have crossed paths with some awesome readers. :)**

5 thoughts on “Good Times and Grub in Vegas”