Are you a fan of Star Wars? Like Star Wars swag? How about having exclusive merchandise from the franchise delivered to your door? Never fear, Smuggler’s Bounty is here! If you’re not familiar with this subscription, here’s the 411:

Cantina was the theme for March’s box, which is the 3rd for the subscription since its launch late last year.

Red Snaggletooth Pop! figure – There were 2 colors available for this figure, the other being a blue chase variant included in 1 of every 5 boxes shipped.

Ben Kenobi Pop! figure – Very nice to see this one included in the box. I had wondered if they would eventually make one of him.

Greedo patch – The patches from this subscription are very detailed. I’ve been keeping the ones I’ve received aside since I’m not sure what to do with them just yet.

Nalan Cheel pin – The theme of this box would be pointless if it didn’t include something, anything, of at least one of the members of the Cantina band (BKA Figrin D’an and the Modal Nodes). They can play that theme song on repeat; it’ll never get old.

Chewbacca Pop! pen – It’s Chewpacca. On a pen. Doesn’t really get any better (or cuter) than that. I would have liked it even more if he were flocked. But still a great item nonetheless.

Han Solo Wanted tee – This was 1 of 4 featured designs for the shirt. I can say that I lucked out with this one. Do I love it? Heck yes, and I’m sure he knows.

This subscription has yet to disappoint. Stay tuned for my thoughts on their May box, Bounty Hunters. Check out their website to see items from past boxes and subscribe. You can also find my reviews from their past boxes via the World of Geek Stuff  in the links below.

For those of you not into Monday Night Football, but love Star Wars, here’s the latest trailer. Excited for December now? I know I am!

As a geek and makeup lover, I am super excited about this collaboration. Set to launch September 4, this collection features lipstick, nail polish, and both regular and waterproof mascara. Check out the photos from Allure here. I’m looking to pick up either the red or nude lipstick and Nemesis nail polish. Still undecided about the mascara. What do you think of this collection, and do you plan on grabbing anything from it? Share your thoughts in the comments.

Have you seen this yet?! If you’re a fan of Star Wars like I am, you probably should. This year has so much going on involving the release of this long awaited movie. Today is the beginning of the Star Wars Celebration in Anaheim, CA. I found out that a few friends are there this week as attendees and as exhibitors, and I couldn’t be more jealous! Although it’s just a teaser, it’s definitely adding to the hype for everyone looking forward to watching this at the end of the year. Guess you can say Christmas is coming a little early for us fans.

I felt the need for another re-post of geek. Sad that I won’t be able to experience this event, but for those of you that plan on going, here’s some info that might help the experience go a bit smoother. Enjoy yourself, and may The Force be with you. 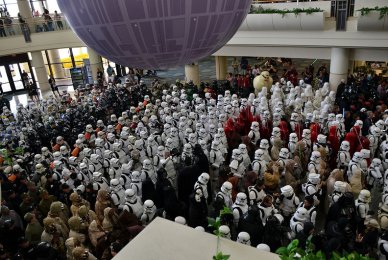 Star Wars Celebration is a lot like most other pop culture conventions, except that it has a singular focus: all Star Wars, all the time. The Star Wars movies had a profound impact on my life and truly helped shape me as a fanboy. So I have been especially thrilled for Celebration this year because of it’s return to Anaheim. However, as experienced as I am with conventions, I have never been to SWC so I will be a first timer like many of you all. But fortunately, a couple of awesome fans wrote up some helpful tips to help you (and I) have a great Celebration weekend. Here are some tips from super fan, James Floyd, for the first time Star Wars Celebration attendee:

1. Use both the app & paper guide
Celebration Anaheim has a useful app for both iPhone and Android that has a con…

I had to reactivate my subscription almost immediately after cancelling it once I found out what would be featured in this month’s box.

Here’s what was inside:

All Loot Crates also come with a special themed pin. I’ve only received 2 boxes so far, but I just might keep my sub for another month or so just to see what exciting things will be in the next one.